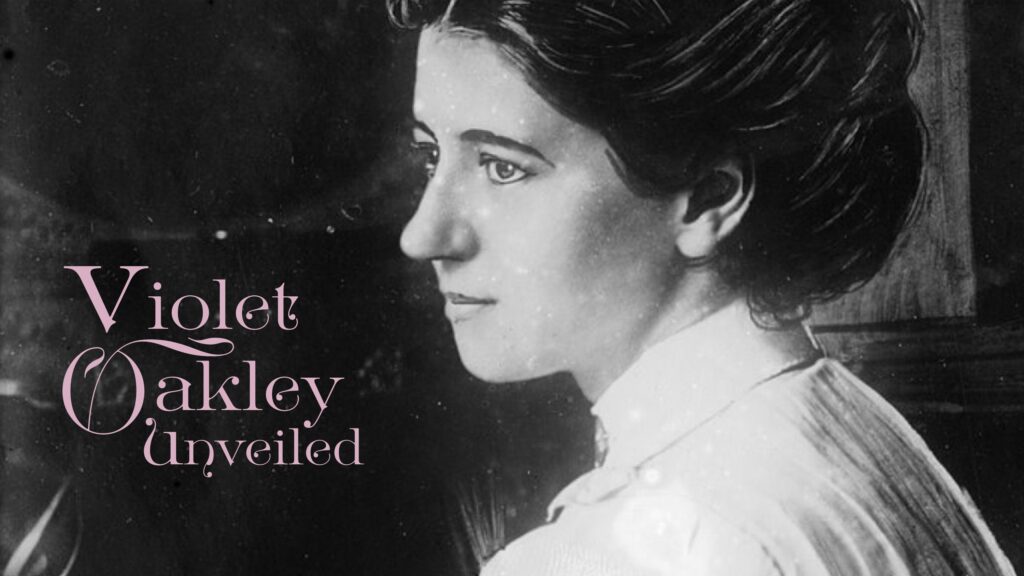 Violet Oakley Unveiled, a one-woman play written by Cindy Dlugolecki, is about Violet Oakley who in 1902 was the first female artist to be awarded a commission to decorate a public building. She completed over 40 murals in the Pennsylvania Capitol, making her the first woman (but not the last) to have a voice in Pennsylvania’s government, if only with her paintbrush.

The play was most recently performed in November 2021 at Open Stage, a theatre that sits in the shadow of Violet’s Harrisburg capitol murals. One of the performances was a private benefit to celebrate the 100th anniversary of the Harrisburg chapter of the AAUW. Stephanie Via, under the direction of Heather Jannetta, portrayed Violet Oakley.

The Making of Violet Oakley Unveiled

In the early 1900s, women were encouraged to consider art only as a hobby while being married to a husband and raising his children. Violet and two other female artists (Elizabeth Shippen Green and Jessie Wilcox Smith) were encouraged by their Drexel art professor, Howard Pyle, to be married to their art.

In 1902, the three women rented the Red Rose Inn, a Villanova estate, and were dubbed as the “Red Rose Girls.” Violet Oakley, a shy, young female artist, is commissioned to paint murals for the newly designed Pennsylvania Capitol in Harrisburg. In 1911, when the internationally known Edwin Austin Abbey—commissioned for artwork in the rotunda and chambers of the House, Senate, and Supreme Court— suddenly dies, the Capitol commission offers Violet Oakley the opportunity to fulfill Abbey’s contract. Violet agrees on one condition: that she be paid the same as Abbey.

With the support and camaraderie of her artist cohorts, Violet then became, as Dlugolecki refers to her in the play, the “Michelangela of Harrisburg.” She was the first woman to have a presence in the executive, legislative, and judicial chambers of Pennsylvania government, if only with her paintbrush.

Violet Oakley’s story of success and sorrow is not well known, but her unconventional life for a woman of the early 1900s is chronicled in two books used by Dlugolecki in her research: A Sacred Challenge, published by the Capitol Preservation Committee in Harrisburg, and The Red Rose Girls, by Alice A. Carter. Cindy wrote Voice of One: Violet Oakley Unveiled in fulfillment of a grant bestowed by Jump Street/Pennsylvania Council of the Arts.

Dlugolecki has been asked to share Violet’s triumphs and trials at numerous and unique venues across the state. Under the direction of Dr. Clair Myers, the play premiered in September 2005 in the Pennsylvania State Capitol Building with actress Heather Jannetta as Violet. In 2009, with a score composed by Chris Purcell, Cindy shared Violet’s murals in the intimate setting of Little Theatre of Mechanicsburg with overwhelming success. Since 2009, the play has been performed by invitation across Pennsylvania–in art galleries, on college campuses, and in the palatial Germantown manor designed and built by the Capitol architect himself, Joseph Miller Huston.